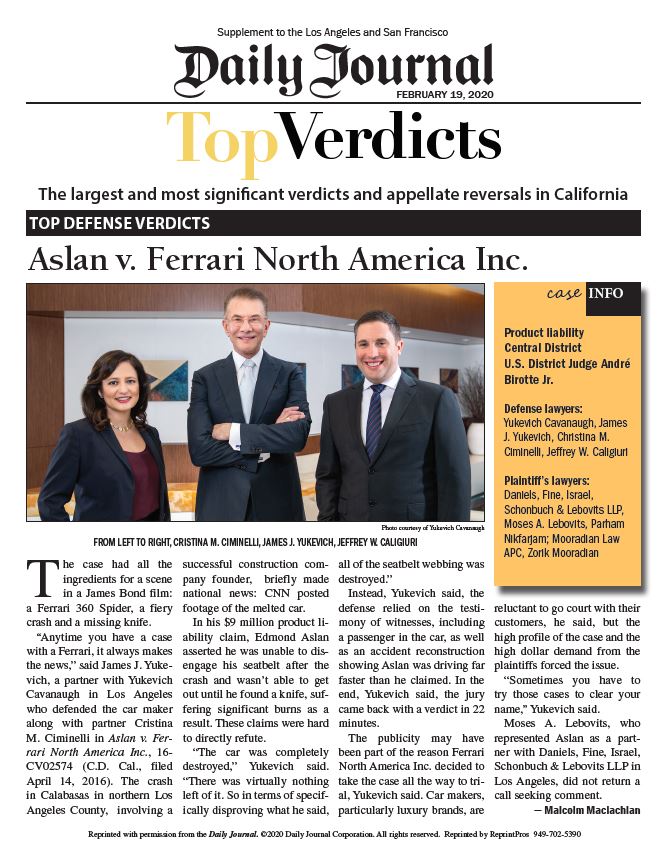 The case had all the ingredients for a scene in a James Bond film: a Ferrari 360 Spider, a fiery crash and a missing knife.

In his $9 million product liability claim, Edmond Aslan asserted he was unable to disengage his seatbelt after the crash and wasn’t able to get out until he found a knife, suffering significant burns as a result. These claims were hard to directly refute.

“The car was completely destroyed,” Yukevich said. “There was virtually nothing left of it. So in terms of specifically disproving what he said, all of the seatbelt webbing was destroyed.”

Instead, Yukevich said, the defense relied on the testimony of witnesses, including a passenger in the car, as well as an accident reconstruction showing Aslan was driving far faster than he claimed. In the end, Yukevich said, the jury came back with a verdict in 22 minutes.

The publicity may have been part of the reason Ferrari North America Inc. decided to take the case all the way to trial, Yukevich said. Car makers, particularly luxury brands, are reluctant to go to court with their customers, he said, but the high profile of the case and the high dollar demand from the plaintiffs forced the issue.

“Sometimes you have to try those cases to clear your name,” Yukevich said.

Moses A. Lebovits, who represented Aslan as a partner with Daniels, Fine, Israel, Schonbuch & Lebovits LLP in Los Angeles, did not return a call seeking comment.

Reprinted with permission from the Daily Journal. ©2020 Daily Journal Corporation. All rights reserved. Reprinted by ReprintPros 949-702-5390